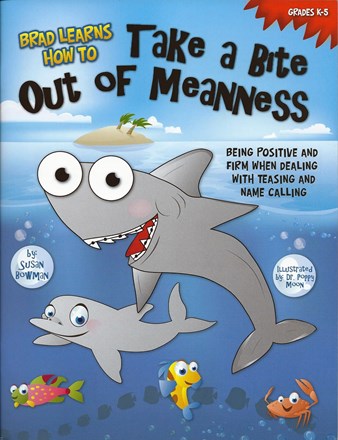 Brad Learns How to Take a Bite Out of Meanness

Brad Learns How to Take a Bite Out of Meanness

This colourfully illustrated story introduces Brad, an unusual shark, who doesn't "fit in" with the other sharks. He is teased and called names by other sea creatures because he doesn't fit the reputation of being a shark. So he tries to not hang around the other sharks hoping this will make a difference. But the teasing continues. He finally turns to his only friend Kia, a humpback whale, who tells him that he should not try to change who he is just to have friends.

Brad learns that, "True friends are those who like you for who you are and accept you no matter how different you are." Kia tells him that it’s important to not respond to meanness with meanness. It is important to be positive. You can be firm with others when you need to, but not mean. When Brad tries these new skills, he learns that when being teased, being positive but firm is a better way to respond. He eventually gains new friends and earns respect for his positive and friendly attitude.

Ages: 4-11Format: CD Data Disc (MAC and Windows Compatible)Flash Player Lessons with PDF Worksheets and PostersBy: Susan BowmanThese wonderful, supplementary, interactive mini-lessons can be used on any digital white board such as SMART Board™ or Promethean Board™ or on a computer. Kids will love these animated lessons, the great sound effects and narration. Lessons include:True Friends Blue Friends - see which friends help Brad find his way through the mazeTake a Bite out Of Mean Words - help...

Click the link below to find out how to order online with your purchase Order acount.

We also accept official purchase orders by post or email and will send invoices with the goods.