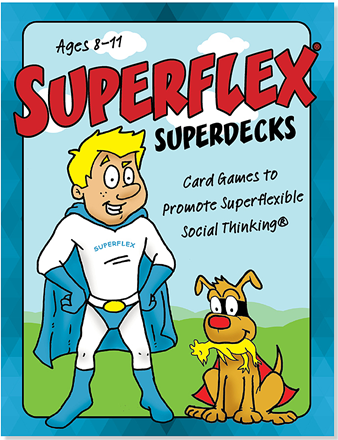 Superflex Superdecks are card games created to invoke your own superflexible thinking as you teach students to be more superflexible social thinkers. The game pack is a companion teaching tool to the popular Superflex Curriculum, which helps parents and professionals teach children ages 8-11 about social thinking, social regulation, and social problem solving. The Superdecks are not an introduction to Superflex, and should only be used with students who are already familiar with the concept of being a Social Detective (introduced in the book, You Are a Social Detective), and are either working through or have completed the Superflex Curriculum.

Ages: for use with individuals ages 8-11, for 2+ players
Format: Boxed game pack 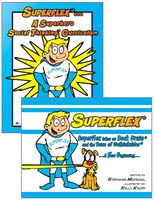 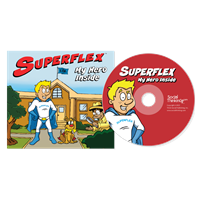 Superflex: My Hero Inside (Music CD)

Sing your Unthinkables to rest with these 13 fun, catchy, and educational songs that support children's social emotional learning as taught through the Superflex curriculum! Each song is an upbeat combination of music and lyrics that can help kids learn more about Social Town, the sneaky Unthinkables, and training at the Superflex Academy to help them seek their "Hero Inside". It was an honor to have these songs written by three-time Emmy nominated songwriters, Michael and Patty... 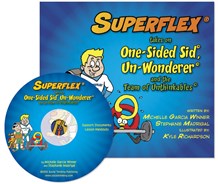 Superflex Takes on One-Sided Sid, Un-Wonderer and the Team of Unthinkables

Written by Michelle Garcia Winner and Stephanie Madrigal Illustrated by Kyle Richardson Superflex Takes on One-Sided Sid, Un-Wonderer and the Team of Unthinkables is the fourth comic book in the Superflex series, designed to help children learn more about their own social behaviour and strategies to regulate it. Individuals should already be familiar with the Superflex Curriculum before reading this book. In this newest comic, children become familiar with several ways to squash the powers of... 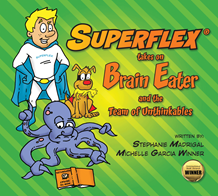 Superflex® Takes on Brain Eater and the Team of Unthinkables

Ages: 7-10+Pages: 74Format: PaperbackPublished: 2012 Written by Stephanie Madrigal and Michelle Garcia Winner Illustrated by Kyle Richardson Superflex® takes on Brain Eater focuses on one of the social cognitive challenges we see most often in our students, distractibility, with strategies on how to stay on track with every day activities like getting ready for school and listening in class! This engaging comic book is the third in our Superflex series designed to help children learn more about... 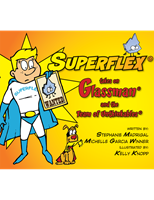 Superflex® Takes on Glassman and the Team of Unthinkables

Written by Stephanie Madrigal and Michelle Garcia Winner Illustrated by Kelly Knopp In Superflex® Takes on Glassman and the Team of Unthinkables, our Super Social Thinker swoops down to help Aiden overcome the Unthinkable, Glassman (who causes our over-reactions to small things) at just the right time: the first day of school! Superflex, the caped cognitive specialist, shows primary school students how they can use strategies to conquer their own "Team of Unthinkables," like Glassman... 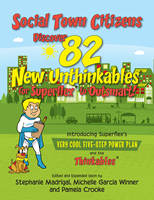 Discover 82 New Unthinkables for Superflex® to Outsmart! Edited and Expanded Upon by Stephanie Madrigal, Michelle Garcia Winner and Pamela Crooke This latest edition in the Superflex series, for children aged 8-11, is a compilation work that introduces 82 new Unthinkables and 14 new Thinkables submitted by Social Town citizens of all ages, which have been edited and expanded upon by Stephanie Madrigal and Michelle Garcia Winner. Unthinkables and Thinkables are grouped by theme/category for easy... 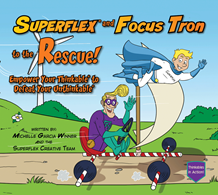 Superflex and Focus Tron to the Rescue!

Written by Michelle Garcia Winner and the Superflex Creative Team Superflex and Focus Tron to the Rescue! introduces readers to the Thinkable Focus Tron. Wherever they are — at school, or home, in the community — Focus Tron helps Social Town citizens remember to use their focusing powers to stay connected to what they’re doing or what others are talking about. In the story, Sarah periodically get visits from the Unthinkable Brain Eater who distracts her thoughts away from her classwork,... 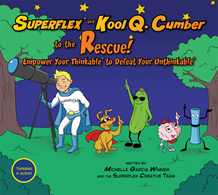 Superflex and Kool Q. Cumber to the Rescue

Written by Michelle Garcia Winner and the Superflex Creative Team Superflex and Kool Q. Cumber to the Rescue! introduces readers to the Thinkable Kool Q. Cumber (we call him Kool, for short!). Kool helps Social Town citizens stay calm when problems happen, and use strategies they learn to figure out the size of a problem and the expected reaction size. In the story, Aiden and his classmates present science projects, but Aiden’s friend Sam becomes frustrated with problems throughout the day. As... 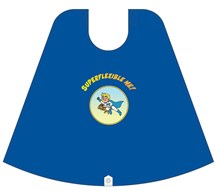 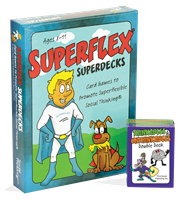 Kids love Superflex and are eager to explore new ways to learn about the supportive Thinkables, the sneaky Unthinkables and discover new strategies to defeat them, using Superflex’s very cool Five-Step Power Plan. This bundle includes one copy of Superflex Superdecks and one copy of Thinkables & Unthinkables Double Deck. Items are also sold individually.Superflex SuperdecksContains four standard playing card size decks, 52 cards each, that can be used in all sorts of superflexible ways to...

Click the link below to find out how to order online with your purchase Order acount.

We also accept official purchase orders by post or email and will send invoices with the goods.